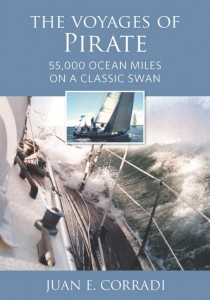 the best book for your summer reading is available, you can now pre-order it ( at Amazon). Don't miss to have it onboard your S&S Swan, it's the ultimate book on a S&S Swan, written by former S&S Swan 38 Pirate's Owner Juan Corradi.

With great good humor and a Wagnerian sense of the majesty in an ocean crossing, Juan Corradi makes his Sparkman&Stephens designed Swan 38 the star of the narrative, and inspires anyone to take to sea in a small S&S Swan, and see the World from her deck. He gives details of her design and build, her string of lucky owners, and the great adventures at sea over 25 years.

Sailing at the highest levels of competition and seamanship, Juan E Corradi sailed and raced his beloved black-hulled S&S Swan, Pirate, across many thousands of adventurous ocean miles, from Bermuda to the Mediterranean, back to the Carribean Sea, and into the Baltic and the Arctic Circle, always with a circle of close friends and his wife Christina. Pirate won the Bermuda Race, and won her class in a difficult transatlantic race in 1992, the Atlantic 500 commemorating Columbus' voyage of 1492. Cruising the Scandinavian waters, he found rocky outcrops that now bear his name. In Greece, he sailed with the Homeric myths and dear friends, and in Scotland he and crew toured the outer islands in a dedicated Single Malt Whisky Cruise.

Juan brings his cheerful erudition and worldly viewpoint to the ancient venture of man against the sea, including the delights of approaching waterspouts, ocean racing (and occassional groundings...!). He considers what defines a classic yacht and the appeal of adventure.

"The Voyages of Pirate: 50,000 Ocean Miles on a Classic Swan", by Juan E. Corradi, published by Seapoint Books, 187 pages, with drawings and illustrations. Inrtoduction by M. Salamon, forward by J. Rousmaniere